My "Frankenstein" Apollo 1240 accelerator needed some decent cooling, so I built something.

The ACT Apollo 1240 is a great accelerator for the A1200, but it requires some extra care. Among the quirks and issues owners of an Amiga 1200 with 68040 or 68060 accelerator have to deal with is heat, especially when using higher- or overclocked CPUs, in a desktop computer case, and when there's no manufacturer supplied cooling mechanism available. The 68040 CPU present on this specimen of the ACT Apollo, with a 80Mhz oscillator, gets unpleasantly hot, so it is likely to become unstable, wear out, and/or damage other components.

To provide some improved cooling to the CPU, a second heatsink was added next to the first one, where previously a 30x30x7mm fan had been positioned. The fan would now require a case and air duct that fits the Apollo 1240 plus a potential 3.3V voltage converter for potential 68060 upgrade, inside the Amiga 1200 desktop case, and direct air towards the CPU and heatsinks in a reasonable way.

Using Blender I created a 3d model, printed it, refined it, and re-printed it. 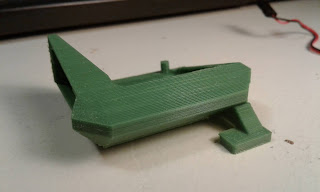 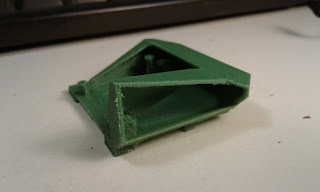 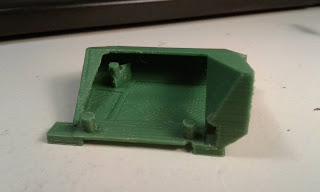 The 3rd incarnation of the model is the (current) final result. The fan more or less rests on three legs inside the case, and has been glued into place with hot glue, sealing off gaps. The case is 3d-printed from PLA at 0.1mm layer height, with spacer sockets on the bottom to leave room for solder and solder pads below, and glued to the Apollo PCB, also using hot glue.

a) The cooling effect seems to be pretty strong! From the previous installation with a CPU temperature that's painful to touch ("ouch! burns!"), it went to somewhere hot that still allows sustained finger contact to CPU or heatsink. Certainly a huge improvement.

b) The noise level is easily tolerable. The fan motor is quite audible at times, but there's comparably little hissing from the air moving through the plastic case. Maybe this can be improved further with a more elaborate shape of the case / air duct.

c) Hot glue is awful because it's somehow neither fish nor flesh, but it's easily removable and makes a very good seal for small gaps in plastic parts. The Apollo 1240 has very few features for extra parts to be be attached to, the CPU might get too hot for direct contact with PLA. Applying and removing hot glue worked very well - at least for development.

b) Overall height, and some space restrictions, are at the borderline. An extra millimeter here and there would be nice - maybe a little cutting and scratching will do, or it's just Amiga case inconsistencies. Otherwise the fan case 3d model might need some modification.

Room has been left for the 68060 voltage converter, but a SCSI connector or second SIMM socket probably won't fit anymore.

I'll see how the PLA takes the temperature, and if the system remains stable in the long term and under heavy use. Also time will show if hitting the Amiga's keyboard above the cooling system and Apollo board will affect the installation. I guess with lots of warm air around, the new fan case will deform if there's mechanical pressure from one of the other computer components applied to it.

For now I consider it a success, entering "real-life" testing stage - 68040 power at 40Mhz, plus there's a chance this new cooling system will allow a 68060 to be installed on the board. :-)