Over the last decades I've tried countless different setups in order to properly capture the Amiga's video output. Pretty much all of them were unsatisfactory, way too expensive (think A4000 plus V-Lab Motion or PAR). Old PC analogue capture cards give quite good results, but device drivers and PCI slots for these are getting really rare. So - finally! - I've decided to drop my attempts with the Composite video connection, and build an S-Video adapter for the Amiga.

Composite video merges all video information into one wire, so its signal quality is somehow limited by design. Composite video is easily available on all Amigas (built-in, or via A520 TV Modulator), but the real disappointment happens when you see this signal recorded with some average digitizing equipment. Weak colors, red all over the place, blurred, misaligned - the results are hardly enjoyable.

The Amiga provides separate red/green/blue component signals on its DSUB23 video output, which many people (including me) use with a RGB-to-SCART cable. Such a cable gives great picture quality, but only if the receiving device a) has a SCART input connector, and b) uses the separate color components.

Among my video capturing attempts was a Terratec USB box with a SCART connector, which looked great from the outside. But it turned out it doesn't use color components, only the Composite signal provided on one of the SCART connector's pins. Blurred, washed out, ...again. Sigh.

S-Video, aka Y/C, uses two wires: brightness (Y, gamma, luma, luminance), and color (C, chroma, chrominance). That doesn't sound like much on first sight (hear), but S-VHS tape recorders featuring S-Video were super expensive back in the day, and most modern analog video capture devices, including the cheap ones, have a S-Video input. So at least some improvement of picture quality can be expected just from the different specifications, and maybe from a different signal path inside the capture device.

A guide on how to build a S-Video adapter for the Amiga was quickly found at Everything Amiga: https://www.everythingamiga.com/2017/02/amiga-rgb-to-s-video-adapter.html

The design of the circuit looks straightforward, it uses a AD724 video chip, and it adds another Composite video output which may come in handy some day. Nice, let's start building! 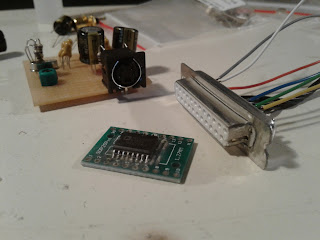 The DSUB23 video connector was created from a DSUB25 one, and the SMD video encoder chip needs a little "daughterboard" adding "human-readable" soldering pads (holes).

First testrun: There's clearly something wrong here. This is what you get when you use a PAL crystal (4.433619MHz), but still have the AD724 set to NTSC output by connecting +5V to STND (pin 1), as shown in the (NTSC) schematics. To switch the chip to PAL video mode, STND must be connected to ground. (As noted in the bottom section / "2017-04-03 UPDATE" of the article at Everything Amiga.)

It took me a couple of attempts to get a working "daughterboard" with the AD724. Maybe the small green PCBs are of inferior quality. Or maybe just my soldering skills are, and I fried something a little too long.

Here are some pictures of the results, with RGB-to-SCART and Amiga 1200's built-in composite video for comparison.

Wow, it's pretty much as good as RGB-to-SCART! I certainly didn't expect that much of an improvement. (And I never knew "Palette" prefs shows up in different shapes depending on screen size. Nice.)

And here's a frame of S-Video captured with a 15EUR USB dongle capture device:

To give the thing some protection, esp. when plugging/unplugging it, a simple housing was quickly created. It's a bit flimsy, and not particularly beautiful, but it'll do for now.

Awesome! It works, is usable, and I'm totally surprised by the amazing capture quality. I expected either total failure, or a just a slight improvement, due to cheap, inferior capture device. But it turns out S-Video makes all the difference, two wires are obviously far superior to just one.

Big thank you to Everything Amiga for sharing your information!

Happy New Year! The AMIGA alive Web Directory got updated with 57 new links and a round of corrections - now 529 websites listed.

As always, if you're looking for something specific, make sure to check the "Misc / Mixed" section, as some websites cover multiple different subjects, e.g. software authors may have created very different applications. And/or try your browser's text-search functions to find keywords like application names, authors, game titles, etc.

Have fun browsing the... 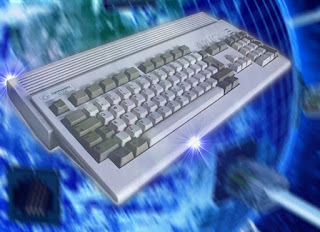