Roughly covering July to September 2020's Amiga game developments, in today's issue we have a somehow unusual original game, a couple of remakes of 8-bit and arcade titles, and as a bonus the full release of a classic.

Around early August "Atarenium Falcon" by Last Minute Creations popped up, as an in-development game demo. Obviously a direct ZX81 port, written in 8086 assembler, under the influence of Iron Maiden. The medium is the message here - it's an Amiga game.

So you're an Amigan, and in this game you kind of have to reclaim stolen coal from yourself to win the game. Doesn't that sound great? 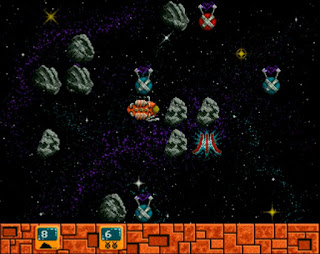 This arcade game looks a bit unusual, yet cute and interesting. With it's quirky backstory - see game's website, link below - you kind of wonder what little surprises it may have in store.

"Atarenium Falcon" was first presented at the Decrunch 2020 in Wroclaw, Poland where it placed 2nd in the GAMEDEV competition. The demo version is still a bit rough around the edges, a final version is announced, but no release date has been set. 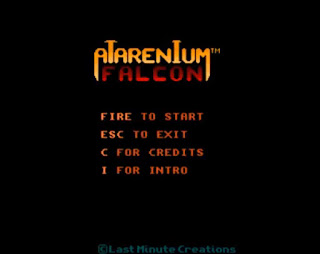 The development history of "New Bubble Story" by Alain Treesong, Mike Parent, and musicians mAZE and Ixien, is a bit of a convoluted one - let's just say it's a remake of 1987 multi system game "Bubble Ghost", and Amiga 1200 game "Super Bubble Remix".

Which basically means it's fun! In this arcade action game your goal is to control a ghost, and safely blow a bubble to the exit of some haunted house. Mouse movements control the ghost's screen position, mouse buttons rotate the ghost left and right to get the correct blowing direction.
The upcoming "New Bubble Story" is a rewrite from scratch, with new levels and sprites, old levels improved, animations, lots of music, and probably many more changes. From what we can see and hear so far the game looks and sounds cute and super polished, and with the unusual "analog" mouse-input method on top of it this is pretty certainly going to be a home-arcade smash hit.

The game is in a early stage of development, label "Agima" is planning to release it in 2021, including a physical boxed edition. It's target platform is an Amiga 500 with 512K ChipRAM and 512k FastRAM.

First released for Amstrad CPC, single-screen arcade platformer "Magica" recently made it's way to the Amiga, thanks to coder Andy Noble. This is another cute looking game, with gameplay similar to "Bubble Bobble".

Stun enemies with your magic, then kick them to stun other enemies, or to create some potion, then collect potions to be able reach the level exit door. Awesome. Good old arcade fun, with a beautiful title screen painting setting the perfect mood for the little wizard and potion sprites you're about to meet. The game requires a standard Amiga 500 to run.

Single-screen top-view racer "Super Sprint AGA" is making progress. You've probably played "Super Sprint" for hours on an arcade machine or some 8-bit home computer, an Atari ST, or even an Amiga, and in case you haven't, you should've done so, and do so now - but regardless, in any case you should make sure you keep an eye on the game's upcoming new AGA Amiga implementation.

Amiga Future magazine has added the full version of WWI flight simulator "Dawn Patrol" to it's collection of free downloads. The game received very positive reviews back in the day when it was first released. Several archives are available, e.g. ADF images, and WHDLoad installers. "Dawn Patrol" requires an Amiga with 1MB of free RAM. 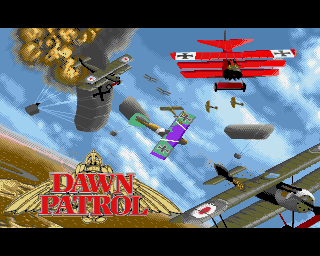 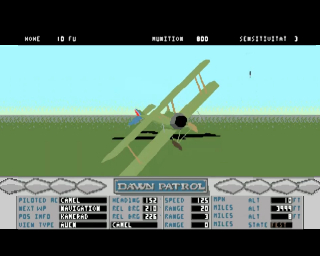 
Thanks for reading! Stay tuned for "Games galore #13"!