Dude, that's a lot of games. The game development scene is bustling with activity. Next round of Amiga entertainment from 2019/2020. There's no time to waste, here we go.


Around Aug. 2019, a new side scrolling action game "DaemonClaw: Origins of Nnar" made it's first appearance. Since then, developers BitBeamCannon keep posting development updates on their YouTube channel. The game's development has started on the Amiga, then has been moved to modern platforms, utilizing the Construct 2 engine by Scirra. The developers plan to start working on the final Amiga version once gamedesign and assets are done. 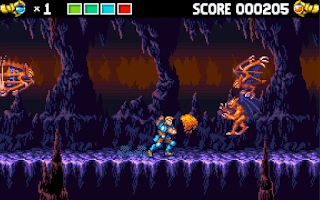 It's gorgeous! You can see a previews of the game in parallax-scrolling motion in the developer's videos. Amiga hardware requirements are unknown so far, but with the promised "classic 16-bit" graphics we can probably assume a OCS/ECS 1MB ChipRAM target platform.


"AmiSaber" by Electric Black Sheep also popped up around Aug. 2019. It looks quite abstract on first sight - and it does so on second! But that's intentional: "AmiSaber" is a kind-of-port of virtual reality game "BeatSaber", in which you try to hit square objects in sync with the music, with a virtual saber in each hand. The Amiga version is controlled using two mice. Very cool. Is this the first two-mice game since "The Settlers"?

Tron-ish, thus great, graphics not too unlike the original, good audio quality, awesome dual-saber controls, and tools and documentation included to create your own levels, using your own music!


Announced in October 2019, "Rotator" is a challenging game of skill, in which you control your craft through more or less vertical landscapes, collecting diamonds, and avoiding all sorts of obstacles, while being threatened by a rising flood below you. It was originally developed in the 1990s, didn't get a release back then, has recently been reworked with updated music, graphics, and levels, and can now be pre-ordered from Psytronik Software.

Tiny animated objects, speech samples, some craft bouncing around, a purple flood, countless levels - this really look great, and enjoyably difficult. And there will also be couple of extra features that should enhance gameplay experience and usability, like a replay mode, where you take manual control of your craft during an automatic replay of your previous attempt.

There will be digital download, and a physical "Collector's Edition Box Set" release. The box set will include floppy disks, sticker, artwork poster (A3 format), and more!

Go to Psytronik's website for more details and pre-order:


Also by Electric Black Sheep is "Project Horizon", a top-view tactical action game that obviously takes place on the dark side of the moon. There's not too much of a back story so far, but the developers have some great ideas, and a spectacular cinematic intro video gives an idea of the direction this is taking: You've landed on the moon, and you're gonna need guns!

"Project Horizon" is still in development, a gameplay preview video (including the intro movie) has been uploaded to YouTube in January. It has nicely animated graphics, and great sound effects, but there are also a couple of features that add a tactical side to the gameplay: destructable environment, different enemy attack modes, mines, a disguised "infiltrator" mode, and an allied non-player-character.

This sounds very exciting, and on top of all the good news it's planned to be free, including sourcecode and level editor. Seriously, you cannot ask for more.

The game will require an Amiga with ECS chipset (or better), 2 MB ChipRAM, and a harddrive.

From watching the latest work-in-progress video - released only two days ago - it immediately becomes clear that this is going to be a fine game. Horizontal parallax scrolling rarely looked that good, and such an amount of vertical freedom of movement has rarely been seen at all in that specific genre, on the Amiga. The developers haven't decided on a final target platform yet, "Boss Machine" runs on OCS/ECS, and AGA tests have been made.


Thanks for reading! Stay tuned for "Games galore #7"!
Check out "Games galore" main page with all articles - click here!