Still more 2019 games! And some 2020 gaming news, too! Yes, we're transitioning into 2020, but in many cases development dates back to 2019, or even further. Either way, more awesomeness here.

In November 2019, a nine level preview of R.E.R.O was released. It runs on a standard Amiga 500, but utilizes more RAM if present. The game looks great, it's tastefully colorful, detailed, and moves smoothly! It also sounds great, with a nice minimalistic in-game soundtrack and lots of oldskool soundeffects!

The original "H.E.R.O." had a certain flow to it - you could fly around quite swifly if you knew your way. "R.E.R.O." seems to do a very good job at capturing the original game's pacing and precision.

A possible Christmas 2019 release was tentatively mentioned, but has passed without further news. We're still happily looking forward to a final release.

Here's a video of the game demo:

Go to Hall Of Light games database for download links:


"Stalker" was rediscovered and restored after members of English Amiga Board (EAB) had found the game in 2013, and wondered what it could be. After some investigation it turned out the game was created in 1993 by Jozsef Punk, Viktor Dara, and Ferenc Bardos. Jozsef and Ferenc had been coding Amiga demos since 1989 as a group called "FI-RE Crew". Jozsef was contacted by the members of EAB, and gave them the full game in its latest development version plus assembler sourcecode and permission to publish both publicly. Cool. :-)

So far this is rather old "news", but in January 2020 some more work was put into the game by adding improved title screens from various previous versions, creating the latest, previously unavailable release 0.778.

According to the author, "Stalker"'s main feature is the rearrangeable playfield:
"The player controls a [...] robot in a scene that is built by same sized blocks. These blocks are moveable in rearrange mode." That sounds very interesting! 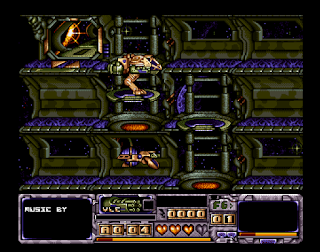 Jozsef has a little homepage for "Stalker" on his website:


They said Doom can't be done on an Amiga.
They said Alien Breed 3D was the best an Amiga could do.
They said you need a 68030 (at least).

Now we're getting actual "Doom" for an unexpanded, 7MHz Amiga 500. Well, kind of, and it goes by the name of "Dread". When this popped up about a week ago it caused quite some excitement, for obvious reasons. Actually this is from 2019, a highly optimized and specialized 2.5D FPS engine by KK/Altair (from Altair demo group) that was first shown at the Xenium developer conference in Poland in Aug./Sep. 2019, but it's the "making-of" video that gets people's attention these days.

Currently this is nowhere near completion, but it very much looks as if the author is working towards a full "Dread" game release. Stay tuned, and in the meantime enjoy the video:


Mutation Software back in business


Very welcome news from the commercial side of Amiga gaming: In February 2020, Adrian Cummings announced the return of his software label "Mutation Software"!

Currently planned releases are a "Micro Series Collectors Signature edition" of remastered games "Tin Toy", "Tommy Gun", and "Castle Kingdoms" in early 2020, and a new game called "Wiz" towards the end of the year.

"Tin Toy" requires an AGA Amiga, as will the new game "Wiz" do, while "Tommy Gun" and "Castle Kingdoms" run on 1MB OCS/ECS Amiga.

Note that these screenshots are from the original game versions - the new editions will be remastered.

All games will be available in digital and physical form. The "Micro Series Collectors Signature edition" (physical, boxed) will contain the game on floppy disc, and a free drinks coaster, and should be available in March - that's pretty much right now!

Go to "Mutation Software" website for more information, and place your order!


"This proof of concept for arcade perfectness on the Amiga was inspired by the various not so stellar Amiga ports from back in the day. 50FPS should have been possible on the original hardware but as long as it hasn't been implemented it doesn't exist so there was only one way to be sure." (www.jormas.com)

Yeah, super smooth "Super Hang-On" style motorcycle racing on any Amiga with 1MB! Ok, not really, but a video released in February 2020 shows a demo that could potentially turn into a great clone, potentially better than the official port the Amiga got back in the day.

Author vesuri, from artist/demo group dA JoRMaS, doesn't have any plans to turn this into a game, but he's considering to release the source code - maybe someone will pick this up and...?

If you want to see it running on your own Amiga, you can download the demo from AmiNet: